This 1960s machine is described as the oldest working original transistorised large computer in the world. And now the museum at Bletchley Park is taking care of “Flossie” as this model is dubbed. What is described as a pioneering example of British electronics was originally installed at London University in 1962. And it is now currently residing in the museum’s warehouse ready for its 60th birthday.

The official date to note, apparently, is 30 April 2022. And thanks to one Stuart Fyfe for highlighting this to us.

Note that it is not yet on public display. The museum writes:

“An ICT1301, also known as Flossie, one of the first mass-produced British business computers, has been rescued from the scrapheap for the third time in its 50-year history and is currently in storage at TNMOC waiting for the time when we are in a position to get it restored and working again. There are no timescales for this as there are a number of logistical steps to overcome, the main one being an area big enough to display it. It is not currently viewable by the public.”

You can read more about the ICT1301 itself here, and also visit the 1301 Resurrection Project website.

Weighing 5.5 tons, with a footprint of about 6 metres by 7 metres, it was made with germanium transistors. 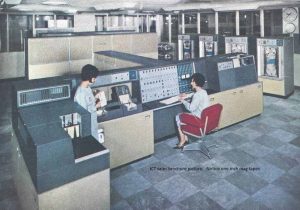 Intended for general commercial work, such as payroll and accounting, among its accomplishments were the printing of GCSE certificates, around the mid-sixties..

Two hundred of these machines were made before production ceased in 1966. Although three other ICT1301s are known to have survived, the museum believes Flossie is the only one ever likely to work again. its restoration team is looking forward to the day that it can go back on display, it says. 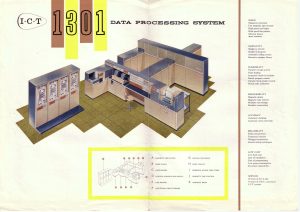 Among other technical details, Stuart describes some of the tech spec:

“48 bits in a “word” are arranged in 12 groups of 4, each group holding values from 0 to 15 (four 1’s), and is treated most of the time as a decimal digit 0 to 9, so the “word” holds 12 decimal digits which is easy for humans to read in the console lights. This is Binary Coded Decimal (BCD). Values 10 to 15 get used for special non-arithmetic purposes like end-of-block marker on magnetic tape. BCD is a compromise between fast 48 bit parallel (would need 48 data paths & lots more floor space) verses serial 48 bits chasing along a single data path (cheaper but too slow to be useful).”

“The circulating Control Registers were not mentioned, but is an interesting technique avoiding the need for a dedicated program pointer, and is the route to calling sub-routines while preserving return jumps to the calling program.”

Stuart also flags the need to give credit to Roger Holmes – who along with his team brought Flossie to almost full working condition before he donated it to The National Museum of Computing – and Rodney Brown, who continues guiding the project for the Computer Conservation Society at Bletchley.

You can read more about the ICT1301 here and see its story in the video below.